Ahead of the tournament on the 30th August at CNG Stadium, we sat down with Ken and Linda Barnes to learn more about their story, help raise awareness of early onset alzheimer's and shout about the inspiring work of Dementia Forward. 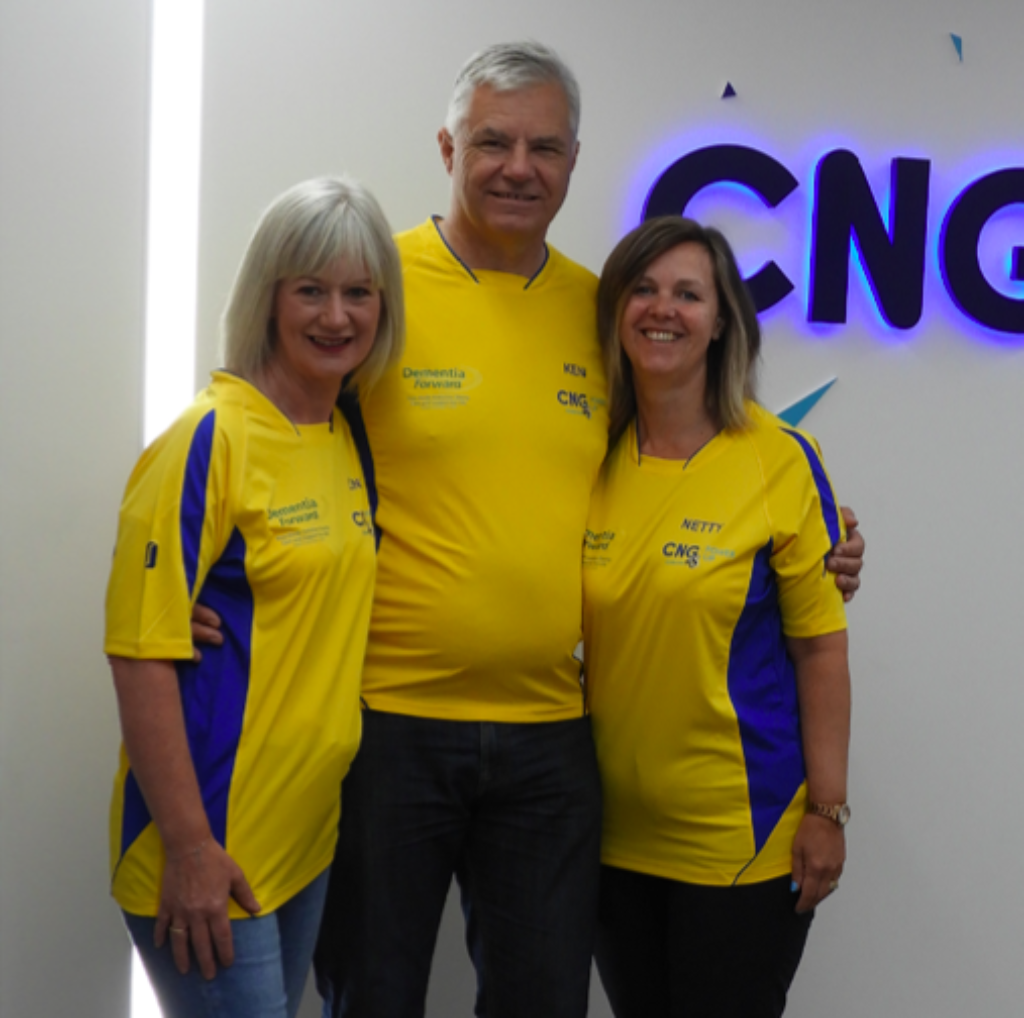 Here at CNG, we’re proud to work with and support a variety of wonderful charities, including the fantastic Dementia First. Local to North Yorkshire, they carry out incredible work across the region, helping those with dementia and their families in many ways along their journeys with the disease.

About 18 months ago we were lucky enough to welcome Ken and Linda Barnes to CNG Towers with Netty from Dementia Forward for a lunch and learn we’d never forget. Their story and Linda’s beautiful poems touched the hearts of so many CNGers, including Amy Collins, who took action to help them achieve Ken’s dream - to hold a charity football event.

Ahead of the tournament on the 30th August at CNG Stadium, we sat down with Ken and Linda to learn more about their story, help raise awareness of early onset Alzheimer's and shout about the inspiring work of Dementia Forward.

Ken, tell us a bit about what you like or enjoy doing, we hear you’re a keen football fan?

Ken says with a big smile, “I love going to watch Leeds play with my son James, it’s great fun.”

Linda adds, “They have a disabled season ticket now. It’s a bit of a role reversal, Ken started taking James to see Leeds play when he was about five, and now James takes Ken.

“We have quite a busy schedule, there’s something on most days. On a Tuesday we go to crown green bowling. We started that after one of Ken’s outings with Dementia Forward and we thought it was something we could do together. On a Wednesday he goes out on all sorts of different trips with his Dementia Forward group, all of whom are under 65, like Ken. Thursdays are for watching the football at Wetherspoons with his new network of retired friends. They’ll be playing in the tournament with our son - they might be a little older but are still pretty fit! Then Ken goes swimming on a Friday with the group at Starbeck pool, which is great. He wasn’t much of a swimmer before but now he’s getting really good. Most weeks he also has one to one golf lessons at Rudding Park with a lovely chap who is great with him, he’s got a grandparent with dementia so is very understanding. Ken’s no Tiger Woods, (yet!) but he really enjoys his time there.”

What was the time like leading up to the diagnosis - how did you discover something wasn’t right?

Linda tells us, “Ken was diagnosed with early onset Alzheimer's disease in March 2016. In a strange way, the results were a relief and an explanation for the odd things that were happening to him. Ken had been a builder for 30 years and then found he couldn’t measure, he forgot how to tell the time, he couldn’t keep track of dates and struggled with money. Any numerical skills seemed to have been wiped from his brain - because they had. A PET scan showed the left parietal lobe was damaged, the area of the brain responsible for numeracy, leaving Ken with a condition called Acalculia which is like dyslexia with numbers.

“We had quite a difficult experience with the diagnosis process, it took about six months overall. Whilst we were relieved to find out why Ken had been struggling with things like the time and day to day numerical tasks, we were also grieving the future we would miss out on and all the dreams we had for when we retire.

“Over the last three years this damage has spread, affecting his short term memory, his ability to do things in sequence and his speech, so it now impacts all areas of his life meaning he cannot live independently.”

What was your understanding of the condition before the diagnosis and are there any widespread misconceptions you would like to educate people about?

Ken said, “I’d never given it a second thought and now I’m in a group of 10 people, all of working age (below 65), with similar stories to mine.”

Linda added, “People seem to only associate it with the elderly, which simply isn’t the case, dementia doesn’t discriminate. Our mission is to educate people, especially young men, on the symptoms and impact of early onset Alzheimer’s. I’ve been to speak with GPs at conferences to look at the diagnosis process, so not to jump to depression, anxiety or stress as they did with Ken initially.

“We feel it is our mission to help other people understand what this disease does, looks can be deceiving - looking at Ken you wouldn’t think anything is wrong. I call dementia a thief. In our family it has stolen a son who supports his elderly mum and dad, a dad with superior practical and listening skills from his daughter and his son, a husband who can’t have a fluid conversation anymore but worst of all, a grandpa who’s experience and knowledge is denied to his grandchild.

“It’s not only taken the future we had planned, but it impacts our everyday life in so many ways. From getting dressed to making cups of tea, with Ken unable to follow sequences, he is now unable to complete basic daily tasks. It can be exhausting, Ken has to take naps due to the amount of brain power it takes to do simple things so he can recharge.

“Unfortunately, a lot of younger men who are diagnosed suffer in silence or deny it, we urge them to reach out and somebody will hold your hand. Being on the correct medication won’t stop dementia, but it will give you more quality time.

“Everyone needs to understand that it’s an invisible illness so don’t take anything at face value, be kind and respectful to everyone you meet because you have no idea what’s going on in their world - I think that’s the legacy we’d like to leave."

How did you hear about Dementia Forward and how have they helped you and your family following the diagnosis?

Linda explains, “We found the Dementia Forward leaflet in the information pack handed after the diagnosis. They’ve really helped give us a structure and routine to our weeks, which is so important and keeps Ken from sitting in front of the TV all day where his condition would deteriorate rapidly.

“They’ve been and continue to be a huge help for me in terms of support and advice because I didn’t know anything about filling for carers allowance, organising powers of attorney and living wishes for Ken. Now it’s all organised and we can concentrate on the now, which is most important.

“They’re a family, and we’re a part of that family now. If we have an issue, there’s always someone there, whenever you need. It’s a really personal service, Julia our admiral nurse was so helpful with everything we needed, especially in the early days.

“They do an incredible job and help so many families who unfortunately find themselves on this journey. Now Dementia Forward have expanded across the whole of North Yorkshire, they’ll be able to help so many more, but they need funds to allow their great work to continue. That’s why we’re here, that’s our mission."

How are you now involved in supporting the fantastic work of Dementia Forward?

Linda says, “CNG kindly invited us to speak at one of their lunch and learn sessions - and they really listened. We’re so thrilled that they wanted to do something, and it’s because of Ken’s passion for football and the lovely Amy Collins from CNG’s help that this event is taking place.

“Although it bears his name, this tournament is not about Ken, it’s about all of those people with early onset Alzheimer's and dementia in North Yorkshire. Sadly, there are many families facing the same journey, and unfortunately once you’re on the path there is no turning back. We need more people to understand the disease and support Dementia Forward in their fantastic work.

“The people involved with this tournament are playing for a vision where the people of North Yorkshire with Alzheimer's and dementia feel supported, informed and included. So thank you for giving your time, effort and cash."

As a lifelong Leeds supporter, Ken and his son are passionate about the game and have spent their fair share of afternoons at Elland Road with their season tickets. Here is a poem Linda wrote about football and the joy it brings Ken;

I used to know the offside rule,

The position in the league,

The tactics and the transfer deals,

A mind of of useless information used to network and start conversation,

The names of every player, the grounds of every team,

Points and tables, fees and scores,

Now not as important as before.

Today’s about the atmosphere,

The hope, the crowds, anticipation,

A choir of raucous voices.

The skill is still appreciated,

The balance and control,

Resulting in a goal.

A graph of raw emotion.

Being part of something big,

When my world is getting smaller,

No one cares about dementia,

Passion’s all that matters here.

But I can still sing every word and song,

In the throng of everyone.

Or if we’ve even won,

But I’ve had the old me back again for 90 minutes with my son.

If you want to be a part of this special day, head down to CNG Stadium on 30th August at 12pm for an afternoon of football. Light refreshments will be provided and families are welcome! If you want to play in the 5-a-side tournament, please get in touch with Amy Collins at acollins@cngltd.co.uk. We’re looking for teams of 5-8 people, with a £250 entry cost per team.

For more information on the wonderful work Dementia Forward do and the services they provide, visit http://www.dementiaforward.org.uk.

Welcome to CNG, which service do you require?

Looking for a new energy supplier?
Are you CNG Energy customer?

Looking for CNG as a shipper?